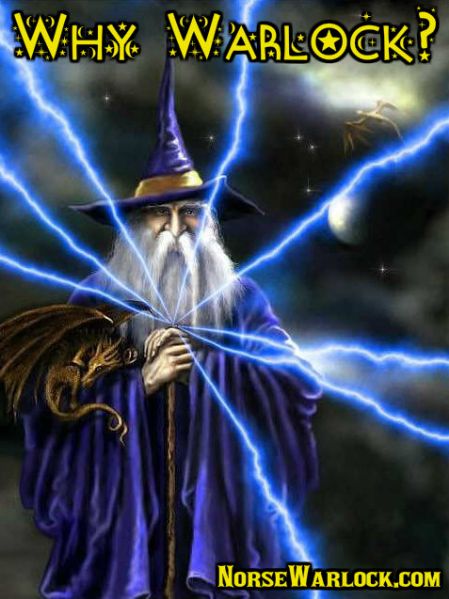 I use the word Warlock to honor my Elders, who taught me that it hails from an old Viking word meaning "Protector of the Law". During the Viking King Rollo’s reign (911 – 923 AD) his wife, Queen Poppa was distressed by the misinterpretation of Viking law by her subjects. The Queen called together a group of judges and sent them throughout the Viking Empire ensuring that the Law was correctly applied. She called these judges, her Warlocks.

During the next 400 years, most of the Pagan religions had been absorbed by the Christian doctrine. Frustrated by the fact that many who practiced Witchcraft still rejected Catholicism, in 1318 Pope John XXII declared Witchcraft to be heresy and punishable by death. The Warlocks became defenders for those accused of Witchcraft. In 1484 Pope Innocent VIII turned the fury of the Inquisition against Witches. The Warlocks continued to defend them, with great success. Unable to defeat them, Rome declared the Warlocks to be traitors to the Catholic faith. When the Warlocks argued that they could not be traitors because they had never been Christian to begin with, Pope Gregory XXIII declared them to be oath-breakers in order to discredit them. In truth, the absolute opposite is true. Of all the Viking hierarchy, the Warlocks were the only ones that did NOT break their oath.

Modern Warlocks are guardians of Honor and the White Light. We reject the dark arts, and encourage positive actions and welcome all who seek and thrive in a diverse and tolerant spiritual world. Join Us Today and embrace the True Viking History that has shaped our New World in every way!

Your cart is empty.